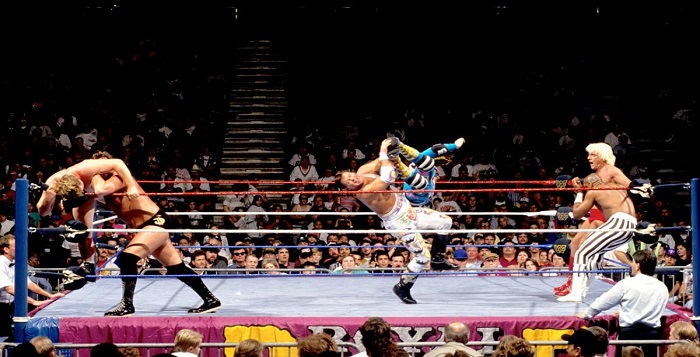 Gorilla “Would you stop!” Monsoon and Bobby “The Brain” Heenan are your commentators.

THE BEVERLY BROTHERS VS THE STEINER BROTHERS

The Beverly Brothers look like magicians with a Vegas residency. Only missing a Siberian tiger to complete the look. Maybe if they could tame Scott Steiner in this match they’d have the equivalent. The Beverly’s get the heat on Scott until he makes a hot tag to Rick. Rick absolutely murders one of the Beverly’s by throwing him right onto his head with a German suplex. Scott is tagged back in to finish with the Frankensteiner. Not really a PPV match, but it works for putting the Steiner’s over.

Sherri Martell is ringside for the first time since getting clocked with a mirror. Shawn didn’t even visit her while she was in hospital, THE FIEND! She gives him the cold shoulder as a result when he flirts from the ring. WHOSE SIDE IS SHE ON!? Shawn looks great in gold chaps with a gold Intercontinental title belt. Wonder why he veered away from wearing that kind of gear later on. Shawn sells Jannetty’s shine like a champ before taking over by slamming Jannetty’s shoulder into the ring post. Jannetty does weird tippy-tappy shit with his feet whenever he is on offence. Shawn works the shoulder for an extended period. During Jannetty’s comeback, Shawn staggers over to Sherri only to get slapped in the face, SHE CHOSE A SIDE! Shawn elbows the ref, which brings Sherri into the ring. She tries to hit Shawn with her spiked heel, but he ducks and she hits Jannetty instead. We then get a really weird finish where Shawn backs Sherri into a corner and gives her a verbal telling off. A bit that seems to take waaaaay too long. Jannetty gets back to his feet and Shawn hits a terrible looking superkick for the win. Sherri runs to the back in tears. Feel like this should have been much better than it was, but Jannetty was probably trashed.

Backstage, Mean Gene tells a hysterical Sherri to get a hold of herself like it’s the 1950’s. Shawn gets in Sherri’s face and Jannetty jumps Shawn from behind.

Nothing to see here. Just two big guys slugging it out with added rest holds. Bam Bam wins with a flying headbutt.

Highlights of Razor Ramon taking out Owen Hart to get inside Bret’s head.

Bret Hart gives his glasses to a kid, and the kid looks as enthusiastic as someone waiting in line to pay taxes. Stu and Helen Hart are at ringside. So odd to see old matches and see a babyface begin a match by working the leg. Doesn’t Bret know that you’re supposed to open with a triple flippy dip from the top rope? The fuck is this psychology shit!? Razor responds to his leg getting worked on by injuring Bret’s ribs after tossing him into the bottom of the ring post. Helen Hart covers her eyes. Match is okay, but far from Bret’s A game. He wins with the sharpshooter.

Caesar and Cleopatra invite the audience to Wrestlemania 9 at Caesar’s palace.

Ric Flair is #1 and Bob Backlund is #2 in a battle of former champions. They wear matching red trunks. That must have been so embarrassing for them when they realised someone else was also wearing the same outfit. Papa Shango is #3 and doesn’t last very long. He is the first eliminated at the hands of Ric Flair, woooo! Crowd are kind of dead through a few entries until Mr. Perfect makes his entrance and goes straight for Ric Flair. They are booked in a loser leaves town match for the upcoming episode of Raw. Perfect eliminates Flair to probably the biggest reaction of the night. Heenan loses his mind on commentary. Mr. Perfect is definitely the most over guy on the night. Perfect eliminates Jerry Lawler, then DiBiase tosses Perfect onto the apron. Three guys and the eliminated Lawler team up to eliminate Mr. Perfect. Terry Taylor is also wearing the same red trunks as Backlund and Flair. Must have been a January sale at the wrestling trunk store. The Undertaker clears out the ring as the Giant Gonzalez makes his debut. He and The Undertaker stare at each other for an awkwardly long time. Gonzalez back hands Taker over the top rope and eliminates him. He then puts a mild beatdown on Taker that Taker sells like death. After all this, Gonzalez is apparently not an official entry, so he leaves. They really tried to put Gonzalez over big here. They really tried. But there ain’t no polishing a turd. Especially in that God awful muscle suit they put him in. Undertaker finally sits back up after Paul Bearer resurrects him with the power of the urn. Yokozuna makes a late entry and cleans house. No one has ever knocked Yoko off his feet at this stage, so we get a battle of the fat asses between Yokozuna and Earthquake. Yokozuna gets the upper hand and dumps Earthquake. Randy Savage is #30. The final four are Bob Backlund (over an hour), Rick Martell, Yokozuna, and Randy Savage. Backlund eliminates Martell. Yokozuna eliminates Backlund. Yokozuna and Randy Savage are the final two. Savage gets the crowd on its feet as he wages a prolonged assault on Yoko that results in him dropping to one knee. “All that for the drop of one knee,” says Yoko-Thanos as he cuts off the Savage assault. Savage comes back again and finally knocks Yoko off his feet. He goes up top and lands the big elbow. Savage looks like an idiot as he goes for a cover in a Rumble. Yoko kicks out and boosts Savage clean over the top rope to eliminate him and get the win. Probably one of the more underwhelming winners in the event’s history. This Rumble also suffered from a distinct lack of star power.

You may have missed 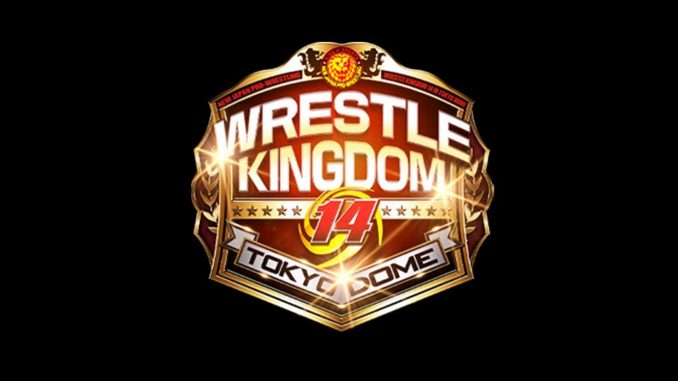